Read the recap, then watch the full #3DXW20 Day One General Session
How do the products we create improve human life? That was the question posed by SOLIDWORKS CEO Gian Paolo Bassi while opening 3DEXPERIENCE WORLD 2020. For decades, the SOLIDWORKS community has inspired designers and engineers to create amazing products. The mission of this event is to provide the community with tools to build a better world.

Bernard Charles, Dassault Systèmes CEO and Board Vice Chairman, then shared his vision for empowering SOLIDWORKS users to dream bigger about the future. This future is at the intersection of technology and humanity. The two mesh to open a new world of possibilities and progress that is uniquely human.

There was no more emotional example of this convergence than the Magic Wheelchair. Christine Getman, Executive Director, Magic Wheelchair, and Chinloo Lama, Director of User Experience Design, Dassault Systèmes, joined Bernard on stage to share an inspiring story of epic inclusion. Magic Wheelchair is a group of makers who have made it their mission to build dream wheelchairs for physically challenged kids. Magic Wheelchair’s group is known for making theme chairs the likes of monster trucks and rocket ships.

At 3DEXPERIENCE World the group gifted two wheelchairs to kids, a Beauty and the Beast-themed chair, featuring incredibly detailed 3D-printed characters from the film, and a Star Wars-inspired speeder bike, the first Magic Wheelchair completely built on an existing chair from Bowhead. Volunteers from Magic Wheelchair built both chairs with SOLIDWORKS and the 3DEXPERIENCE Platform. Bowhead designer and SOLIDWORKS community favorite, Christian Bagg, demoed the speeder bike onstage and delivered the funniest line of the event, “it was the perfect opportunity to trick SOLIDWORKS into paying for a speeder bike.” Getman stressed the importance of this program for kids with limited mobility, “I can speak from personal experience. When a person is heard, validated, and respected, they can go anywhere. Inclusion matters.” The Magic Wheelchair presentation is must-watch for any designer and engineer. It shows the true power of this community. It’s not just talk and buzzwords. It’s life changing and life affirming, and this community is making magic a reality.

Mike Schultz, Paralympic Gold and Silver Medalist, 10 time X Games Gold medalist, and Founder and Inventor of BioDapt, provided another inspiring example of what happens at the convergence of humanity and technology. In 2008, Schultz lost his leg in a snowmobiling accident. Ten years later, he won a gold medal at the Paralympic Games using a prosthetic leg he designed in his garage using SOLIDWORKS. Today Mike’s company makes prosthetics for people from around the world. He even works with fellow athletic competitors. Further, Mike has collaborated with the Center for Advanced Designs to continue his prosthetic evolution by using next-gen SOLIDWORKS tools, such as 3D Sculptor. Then Schultz was introduced to Matt Carney, a Ph.D. at MIT, who is working to connect cybernetic interfaces to the human body; enabling direct control of robotics limbs. Carney is focused on the future of prosthetics and eventually creating full biological capabilities in artificial limbs. Gian Paolo challenged these great minds to collaborate and promised to have a follow-up at 3DEXPERIENCE WORLD 2021. 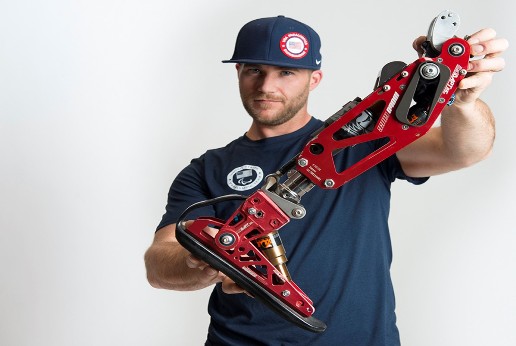 After these amazing stories from Magic Wheelchair and Mike Schultz, it was time to talk about the next generation of SOLIDWORKS tools. Gian Paolo described 3DEXPERIENCE WORKS as the most impressive expansion of the SOLIDWORKS portfolio to date. New tools available to SOLIDWORKS users now include the most powerful applications from ENOVIA, SIMULIA and DELMIAWORKS.

Gian Paolo described that, throughout history, the efficiency introduced by new technologies resulted in more time and money. As a result, people could dedicate themselves more to think, explore, invent and exchange ideas. The new technologies in 3DEXPERIENCE WORKS are no different. On the platform, everything and everybody is connected, there are no gaps in the creative process. There are no stops and starts between each stage. Concept, design, simulation, manufacturing, management, sales, and service are all connected and integrated in real-time. With 3DEXPERIENCE WORKS, separate linear processes become a continuous loop. Information on every aspect of a product or process is readily available in one place so you can get more done in less time and have more time to think and create.

How do you access 3DEXPERIENCE WORKS? Later this year, three offers will become available: Standard, Professional, and Premium. It’s important to note that all offers include a special version of SOLIDWORKS connected to the platform. In addition, the offers provide the advantages of being connected to the 3DEXPERIENCE platform:
While these offers are coming later this year, you can now opt to purchase the 3D Creator and 3D Sculptor roles with an introductory offer for existing SOLIDWORKS users. 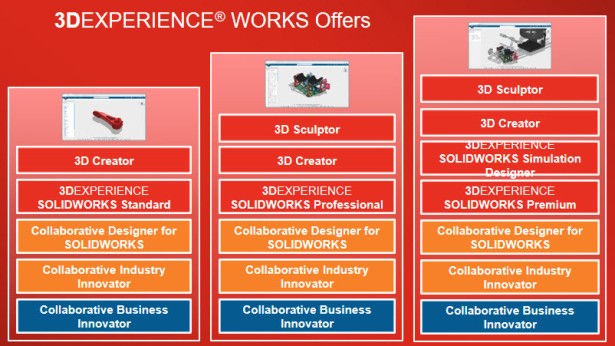 -
The day one general session closed with a presentation from Charles Adler, founder of Kickstarter. Adler is dedicated to enabling creative people to exceed their potential. A key takeaway from his presentation was the impact of Kickstarter. The platform truly connected people beyond money or good. It connected people at a personal level – love for a craft or a project. It was a fitting end to a discussion at the intersection of technology and humanity.
Back