In the very beginning stages of design, ideas are commonly sketched out on paper; also known as “napkin sketches” due to the common practice of sketching at the local watering hole. This convenient method is ideal for visualizing our thoughts quickly but doesn’t allow us to prove out positioning and motion behaviors. A major design requirement for URB-E from the onset was to minimize the footprint in its stored position while maintaining the ideal wheelbase for stability and maneuverability.

Using SOLIDWORKS CAD, URB-E was able to utilize the powerful 2D Layout sketch functionality within an assembly to optimize this desired folding motion. Sketch blocks representing the key components of the design were used not only to validate the linkage positions and lengths, but this sketch geometry drove the downstream 3D design of assemblies and components.  Let’s take a look at how to get started with Layout Sketching.

“The major advantage of designing an assembly using a layout sketch is that if you change the layout sketch, the assembly and its parts are automatically updated. You can make changes quickly, and in one place.” – SOLIDWORKS Help File

To get started with a Layout Sketch, begin with a new assembly. From the “create new assembly dialogue”, you will see the option to “create a new layout sketch”.  If you miss this or if you are working with an existing assembly, you can select the “Create Layout” Command from the layout tab on the command manager. 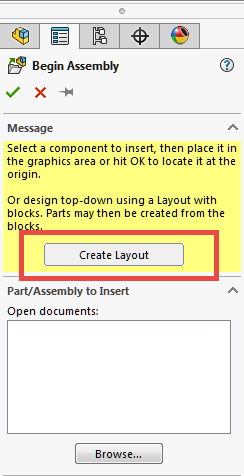 Once we are active in the layout sketch, let’s create the initial layout design of the scooter linkages, using traditional sketch tools we already use every day, such as construction lines as shown below.

The next step is to identify sketch entities that will behave as individual components or subassemblies within the design. Multi-Select these groups of sketch entities and then use the “Make Block” command from the pop-up toolbar (this command is also found in the command manager). 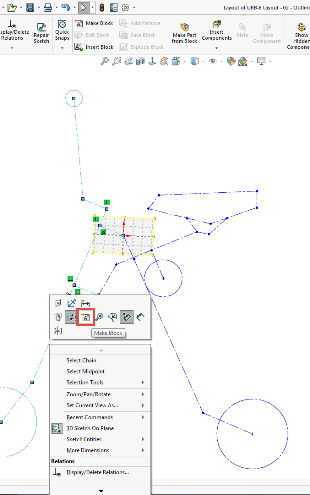 PRO TIP: Blocks enable you to:

Before we continue on with our concept layout, it’s worth noting another great use for blocks when designing in SOLIDWORKS.  Many new designs incorporate some number of existing components from previous designs. For example, we are going to reuse an existing seat that has been used in other models of the URB-E. For this reuse of commonly used components, blocks can easily be saved to the design library for future layout assemblies.This speeds up the layout process and ensures that we have an accurate representation. Additionally, when inserting the block from the library, you can select the option to “link to file”. This way, if there is ever an update to that particular seat design all existing designs referencing that block will reflect the change in geometry.

During the layout sketching process and block creation, SOLIDWORKS Motion can also be used to add motors and actuators to investigate the kinematic response, or we can also use inverse kinematics to help drive the design. From here, valuable information such as angular and linear displacements, trace paths and other data can be obtained to validate the conceptual design well before moving into a detailed, 3D model.

Now that the 2D concept design has been completed and validated, we can move forward to the 3D modeling portion of the design. Using the layout sketch and sketch blocks as the basis of the design, the geometry starts to form shape and come to life! 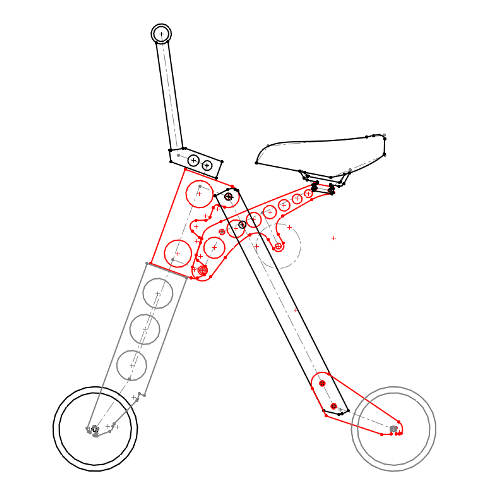 Do you want to see more on how the SOLIDWORKS solution has helped companies like URB-E bring products to market with fast and efficient workflows?
Back