Invertigo. Steel Vengeance. Batman. While these may sound like comic book titles at first glance, they are actually the names of popular roller coasters located at amusement parks across the U.S. that have garnered the passion and interest of Matt Schmotzer.
A systems engineer working on new fuel-metering systems for 2.0L/2.3L engines at the Ford Motor Company by day, Schmotzer devotes his spare time to a roller coaster replica sideline that combines his zeal for thrill rides with his SOLIDWORKS modeling skills and 3D printing expertise. Invertigo, Schmotzer’s fully functional 1:25 scale replica of the inverted boomerang shuttle roller coaster of the same name at King’s Island near Cincinnati, Ohio, will be on display at the SOLIDWORKS World 2019 February 10-13 in Dallas, Texas.

The replica roller coaster aficionado’s passion for thrill rides began after he rode the Iron Dragon, a mild suspended rollercoaster at Cedar Point in Sandusky, Ohio, as a very young child. Schmotzer’s family visited Cedar Point, which bills itself as The Roller Coaster Capital of the World with 18 roller coaster rides, every summer, and while those experiences contributed to Schmotzer’s love of roller coasters, he didn’t catch the roller-coaster-replica-making bug until he learned to use SOLIDWORKS design software while completing his senior design project at Purdue University and 3D printing tools during his work at Ford.

“I majored in Mechanical Engineering and minored in Computer Graphics Technology as an undergraduate at Purdue,” Schmotzer recalls. “While I took some courses on CATIA® 3D design software, and regularly use CATIA in my work at Ford, the School of Mechanical Engineering required that I use SOLIDWORKS® 3D design software to complete my senior design project. I picked up and learned how to use SOLIDWORKS quite easily because of its intuitive user interface and have continued to use SOLIDWORKS for my roller coaster replica hobby since then.”

Schmotzer, who now has a seat on the Dassault Systèmes SOLIDWORKS 3D by Me Advisory Board, providing input on what hobbyists want to see in a 3D CAD package, began work on the Invertigo replica in early 2017, following several years of using 3D printers in his work at Ford. “I’ve always had a love for roller coasters and a passion for building roller coaster models with the ultimate goal of creating a functional, operating scaled-down version,” Schmotzer explains. “With SOLIDWORKS software and 3D printing technology, I realized that I have the tools that I need to create functional replicas, modeling the parts in SOLIDWORKS and cost-effectively 3D-printing them, which transformed building a working roller coaster in my garage from a dream into a reality.” 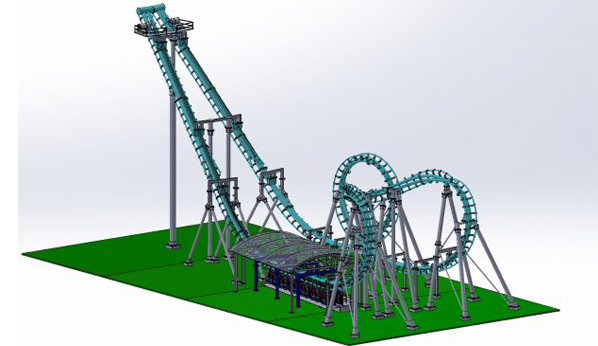 Invertigo was Schmotzer’s first roller coaster choice because he wanted to create a replica of a roller coaster that he’d actually ridden and also needed a relatively short layout in order to fit the scaled replica in his garage. Schmotzer took the layout for Invertigo from the NoLimits Coaster Simulator 2 video game and exported the layout’s XYZ coordinate data points of the track spine into a Microsoft® Excel® spreadsheet, with which he applied the desired scaling factor before importing the scaled coordinates into SOLIDWORKS. He then used SOLIDWORKS to design the track profile, support structure, trains, mechanisms, and launch station. 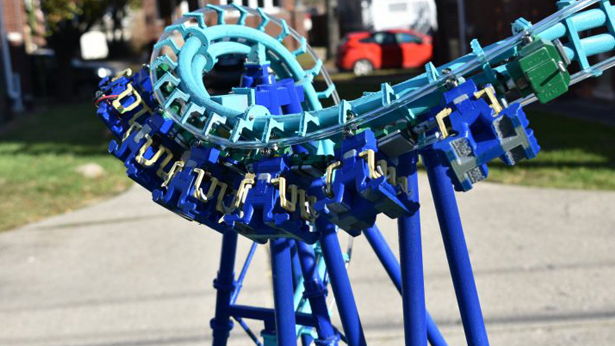 Although modeling and 3D printing the Invertigo components was fairly straightforward, Schmotzer says that he encountered challenges in getting the cars to run smoothly on the track and complete the coaster circuit. “The parts were fairly easy to model and scale down, but the physics at work don’t scale well because the friction and force are not propotional,” Schmotzer stresses. “For example, a roller coaster car weighs 1,000 to 2,000 pounds and the replica car weighs less than 25 pounds. The biggest challenges were reducing friction on the train wheels, getting the lift hills to work correctly on a gravity-driven ride, and minimizing rail vibration to ensure that the train completes the entire ride circuit without coming off the track.” 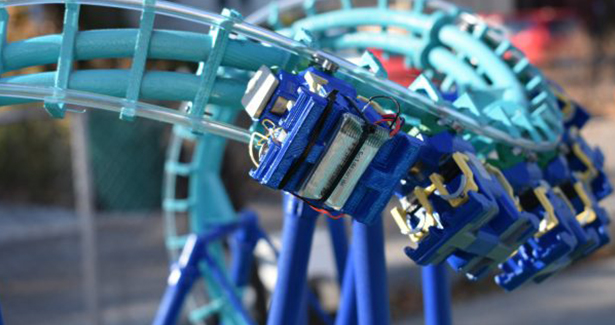 Schmotzer solved the friction problem by using special ceramic bearings, replaced the chain-driven lift mechanism with a magnet-based system, and replaced the 3D-printed rails with plastic tubing that he glued to the 3D-printed track, sections of which are bolted together with M2 fasteners. The Invertigo replica comprises 33 separate sections of track and sits on a 4×8-foot table. The functional roller coaster replica will be running and on display at SOLIDWORKS World 2019 in Dallas.
Watch the video below to hear Matt describe what inspired him to start creating rollercoaster replicas.

Commenorating Steel Vengeance, Taking on Batman
News of Schmotzer’s accomplishment with the Invertigo replica soon drew the attention of roller coaster fans, including the management at Cedar Point, who engaged Schmotzer to create a replica of its newest roller coaster: Steel Vengeance. Debuting in 2018, Steel Vengeance transformed the old, wooden Mean Streak coaster into a hyper-hybrid, steel-on-wood coaster that combines the old ride layout and wooden support structure with modern steel-coaster performance, including a 90-degree, 205-foot initial drop; four inversions; and 30 seconds of airtime, the most on any roller coaster on Earth.

Although the 1:42 scale Steel Vengeance replica, which is on display at Cedar Point, is a static model that is not functional, the project was still challenging because it combined 3,500 3D-printed components with an intricate basswood support structure. “Cedar Point gave me the blueprints for the ride, which resulted in the coolest model ever,” Schmotzer notes. “They didn’t want an operating attraction—only a novelty to put on display as part of the Steel Vengeance launch. However, I learned a lot from making both the Invertigo and Steel Vengeance replicas—knowledge that was put to good use on my next project: Batman the Ride.”

Schmotzer was able to reduce modeling and 3D-printing time on the Batman the Ride replica by tapping his experience from the first two replica projects to develop a more systematic approach; by using additional, faster 3D printers; and by leveraging the open SOLIDWORKS API to automate the creation of track sections in SOLIDWORKS. “With Invertigo, each of the 33 track sections took 12 hours to print, so the entire track took over a month to create,” Schmotzer points out.

“But what really added to the design time was splicing together the individual track sections in SOLIDWORKS,” Schmotzer continues. “I had to manually hand-splice together all of the track sections on Invertigo, which took about three weeks. On Batman the Ride, there are 86 sections of track, more than double that of Invertigo. So, I worked with my wife, a computer scientist, to combine a series a macros with an executable file that she created in Microsoft Visual Studio® to automate the track-splicing process. What used to take three weeks of manual effort on Invertigo is now just a button click on Batman the Ride. I’ve also increased the number of 3D printers that I utilize from six to 10.”

Schmotzer says that he chose Batman the Ride as his next project because there are 11 of them installed at Six Flags amusement parks all over the United States and more people are familiar with the ride than they are with individual rides that are only in one location. “Part of what I like about this hobby is that I like meeting new people and contributing to the enjoyment of others,” Schmotzer says. “What better way to achieve that than by building replicas of roller coasters that many people know and love.”

Schmotzer also wants to use his roller coaster replica hobby to inspire the roller coaster and theme park designers and engineers of tomorrow. That’s why he brought and demonstrated his Invertigo replica during a visit with students in the Theme Park Engineering & Design (TPED) course at Purdue, where Schmotzer is working on his graduate degree in Mechanical Engineering.

“It was great meeting with the TPED students and fielding their questions,” Schmotzer says. “If my roller coaster replica hobby can inspire even just one of them to pursue a career as a roller coaster designer, then I’m doing something right. I just love roller coasters and enjoy interacting with other roller coaster fans.”

What’s up next for Schmotzer? “The layout for the Millenium Force [at Cedar Point], my favorite roller coaster, is half done, and I’ve completed the design and printed sections of the Magnum XL-200 [also at Cedar Point], another favorite,” Schmotzer says. “Who knows how many I’ll make in the coming years.”
Back